LENR Technology, which is the basis for the reactions occurring in the ECAT core, have a huge advantage over existing energy sources because it utilizes the energy bound in the atomic nucleus. Earlier this energy has only been utilized in nuclear reactors based on fission.

The superiority of LENR Technology lies in the energy density of the underlying reaction. The chemical reaction for burning coal in air, for instance, is

where the 4.1eV(=6.6*10-19J) is released as heat. This is to be compared with the Rossi Effect where the main LENR processes in the ECAT core is

where the 17.3 MeV(=2.8*10-12J) is also released as heat. Hence, the heat released by the main LENR process in the Rossi Effect is about 5 million times higher, per atomic reaction, than what we get from a chemical reaction like burning coal.

It is because of this fact that LENR fuel has such big advantage over chemical fuels such as coal, oil and gas.

Figure 1. 1 barrel of ECAT fuel has the oil equivalence of a full Supertanker

It should be pointed out that the exact proportion of all LENR reactions in the ECAT technology is not fully disclosed or known why an exact figure of the specific energy cannot be calculated. As ballpark figures, all LENR reactions give 1 to 6 million times more energy per atomic reaction compared to coal while masses varies from ⅓ of coal (D+D) to 6 times coal (Ni+Li+2H) giving a total span of 100,000-10,000,000 times more energy per unit mass. Volumetric energy density is estimated to lie between 1,000,000 and 10,000,000 times the energy density of oil and coal. In all further comparisons, the lower numbers will be used as estimates to be on the safe side.

Besides the superior energy density, in order to have commercial success with a product based on LENR one has to demonstrate:

Specific Power more or less limits what applications the energy source can be used for. Below is a table of approximate lower limits for various utility applications:

In order to be able to power all these applications with a LENR process one, therefore, needs to find a specific power of the LENR technology to exceed 10 kW/kg. As a reference in Validation Report, the ECAT achieved 4.7 kW/kg for the reactor and 2.1 MW/kg for the fuel (4.7 kW/kg is the correct number when it comes to comparison to above utility applications which includes the whole motor for instance when it comes to cars).

COP (Coefficient of Performance) is a measure of the ratio between energy output and input. Leonardo Corp guarantees a COP of 6 for the ECAT 1 MW, meaning that it takes a required 166 kW of input power to produce 1 MW of heat. Also note that the ECAT High-Temperature test prototype is currently working at COP 3.7, see ECAT reports.

Working Temperature is an important concept for the basis of building product applications upon a heat source, such as the ECAT core. One needs to know the physical and mechanical limits in transforming heat into work (work can be electricity or the movement of a car for instance). The physical efficiency limit of heat-to-work conversion is defined by the Carnot efficiency,

which is the physically maximum of electricity you can get from such a thermodynamic process (273 is the difference between degrees Kelvin and Centigrade).

In addition to physical limitation, all mechanical processes have energy losses, and as a rule of thumb usually, only 60%-70% of the Carnot efficiency is achievable in practice. Assuming mechanical efficiency of 65% gives a formula for achievable net electricity efficiency taking into account the input power used to drive the process, which is 1/COP:

Should the net electricity efficiency (in the above formula) be negative the interpretation is that not enough electricity is produced from the heat source to support its own need for input power.

Nevertheless, heat is also a product, so even if a heat source cannot break even on electricity, it might still be viable as a heat source product. Below, the net efficiency formula is put into a heat source utility map divided into viable products such as Heat, CHP (Combined Heat and Power) and Power. 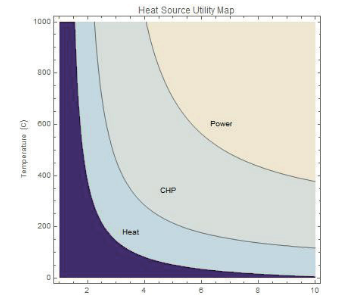 The ECAT High-Temperature test core operates at temperatures as high as 1300C, [Validation Report 3]. Hence, if a COP above 4 can be achieved, most energy problems in the world can be solved.

Power Elasticity is the concept associated with the response time of the power output and can also be a limiting factor depending on applications. For instance, a car needs a short response time for sudden power changes such as single-digit seconds, i.e. ~1 s, while heating applications for instance easily can handle response times ~10 000 s due to heat inertia in the system. As a ballpark for applications with power load differences of Max Load = 10-100 x Min Load, acceptable response times are:

Power Elasticity can of course also be improved through the various hybrid solutions with an external power accumulator such as a battery for a car or a water tank for heating etc.

When all these technology hurdles are solved we look at completely different ranges and operation times per fuel load on all existing powered products.